Free correspondence in instant messengers is a convenient feature for mobile device owners. Lumiya brand phones have been adapted to this. But the developer stopped supporting the OS of these devices. The messenger also refuses these smartphones. In the article, we will consider a variety of models, ways to install the program and whatsapp prospects for Nokia Lumia.

The Finnish company released mobile devices based on the Windows Phone platform (developed by Microsoft), giving them the name Nokia Lumia. The first of them: the 800 model, which was positioned as the flagship device, and 710. They were shown to the public in 2011 at the Nokia World conference. 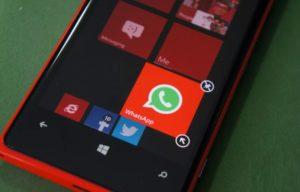 Subsequent models – 610, 640, 650 acquired NFC technology. It is also a wireless data transfer between devices within a radius of 10 centimeters..

It allows you to pay for purchases in the supermarket, transfer to another mobile links, applications. At the same time, the second phone must also have an NFC chip.

The technology works like this. On the smartphone you need to open the application you want to share. Bring the device to another mobile backrest. A beep should sound – the NFC chips of the phones have established a connection. Press the “main” mobile display to activate data transfer. At the end of the process, hear a beep.

Thus, you can download the application to the second phone – no need to go to the market, enter the name of the program, copy the link and send. You can also launch the site you have open on another device. When paying for purchases in the supermarket, the smartphone is attached to the terminal.

What versions of Whatsapp are suitable

On brand smartphones, you can use old versions of the application that have already been downloaded. New downloads from the market will not work.

The Microsoft website says: “We will stop supporting WhatsApp for Windows Phone after December 31, 2019. You can continue to use WhatsApp on Android, iOS or KaiOS platforms”.

However, on the English-language Internet, you can find information that the WhatsApp beta tester WABetaInfo is working on an application for the universal Windows platform (UWP). This will allow you to use it on Windows Phone and Windows Desktop. When exactly such a program will be released, it does not say.

Prior to being removed from the market, Watsapp could be installed on Nokia Lumia models that met the following requirements:

You could download Vatsap to Nokia Lumiya from the store. Installation steps did not differ from those for other phones.

Free download of WhatsApp on Nokia Lumiya was allowed from the Windows Phone Store. The market icon is located on the main menu.

It was necessary to click the image of the store. The Store screen opens. Next, you had to click on the magnifying glass icon located below. A search engine appeared in which it was required to enter “whatsapp”. A line with the name of the program to be pressed was displayed below it. Messenger started to load.

When loading was completed, an image of the Watsap icon appeared. By clicking on it, you could open a page with an overview of the program. Downloading started when you click Install. “Downloading” was launched, then the Vacap icon appeared. It was required to click it, an item on the terms of use and privacy policy / “Accept and continue” was opened.

Then it was necessary to enter the phone number and confirm it with the code from the SMS sent by the messenger. An account was created, a name was invented, and an image was uploaded. This is the way to install WhatsApp on Nokia Lumiya.

The authorization process is entering the phone number and then the code that the application sends. In the Chats tab, Vatsap pulls from the phone book those who have the messenger installed.

Messenger users like that the program provides the opportunity to communicate and send various content for free. However, the fact that the developer has stopped supporting and updating the program for Nokia Lumia affects the functioning of the messenger – the video function may not work. But the phone itself has certain advantages.

Someone like the Glance screen, the interface, the integration with MS Office, which still make using mobile fun. And someone did not like the lack of the ability to download applications from third-party developers.

Now Vatsap cannot be downloaded to Nokia Lumiya’s phone. It is allowed to use old versions that have been downloaded. Foreign sources say the WhatsApp beta tester is working on an application that can be used on Windows Phone and Windows Desktop.

How to forward a song to WhatsApp
Is it possible to listen to a conversation on WhatsApp
Why WhatsApp does not send messages
WhatsApp Celebrates 2 Billion User
How to add a member to whatsapp group
Add a comment
Нажмите, чтобы отменить ответ.
Categories
Related Posts
How to make a link to Instagram on WhatsApp
How to save photos from Whatsapp
How to change whatsapp message
How to set your melody on Whatsapp
How to quickly and free install WhatsApp on an Android tablet
This website uses cookies to improve your experience. We'll assume you're ok with this, but you can opt-out if you wish. Cookie settingsACCEPT
Privacy & Cookies Policy