Chatting via WhatsApp has become very popular. Almost every second smartphone owner has this messenger.. The most popular phone models are based on Android or iOS. But this is not the end of the mobile device market. There are not so popular, but no less worthy brands of phones, for example, BlackBerry. We will talk about them and WA for them in this article..

BlackBerry – a smartphone from Canada, which is known worldwide as a phone for doing business.

This is due to the fact that:

REFERENCE. As a rule, blackberry operates on its own operating system, although you can find a number of models based on Android.

How to install whatsapp on blackberry

In 2018, Votsap refused to support devices with BlackBerry 10 and BBOS.

Do not be upset, there are ways to continue using WhatsApp on your BlackBerry phone, and we will tell you about them. But first, let’s talk about WA itself. 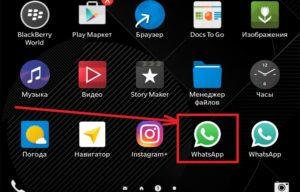 Three main advantages of the WhatsApp messenger, which allowed him to gain popularity around the world:

Sometimes it seems that the possibilities of the Votsap application are endless. This is not that simple chat where people only communicate via SMS exchange. You can also send media files, voice messages, animations, emoji, make calls and video chats here..

The messenger allows you to create collective chats, maintain a blog, change profile settings, adding photos and status, as in popular social networks.

WA application is almost 10 years old, during this time about 100 versions of the program have accumulated and this is only for Androids. About the same number of options has an application for iOS. In addition, do not forget that before the developers supported Blackberry, Windows Phone.

The manufacturer WA is trying to correct errors, add new features and ensure stable operation of the application, compatible with various models of smartphones. This is due to a large number of versions.

REFERENCE. If possible, of course, you need to install the latest Votsap options. However, BB will have to look for an old version dating back to the time that Blackberry and Vosap collaborated with each other.. 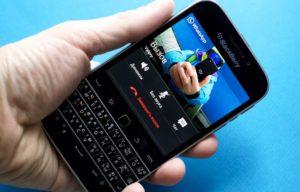 Features of using WhatsApp for BlackBerry.

On January 1, 2018, a message appeared on the official WA website that the messenger was stopping working with the blackberry platform: release updates and versions for new smartphone models.

However, you can still install Vatsap on Blackberry, but older versions, and no one guarantees their stable operation.

REFERENCE. The Android-based BlackBerry did not affect the situation in 2018. They still get support from official WhatsApp developers..

Before downloading the WA installation file to your phone, you need to consider the minimum requirements for the BlackBerry specification:

HELP: BIS is a service that supports sending and delivery of messages through various mails, instant messengers, etc. on the Internet.

The old version of WA is still being downloaded from the web store..

How to install the application 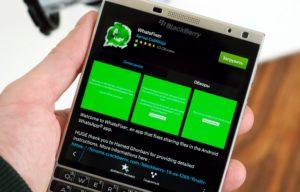 After the messenger boots up, the BB installer will turn on. Click “Install,” then “Accept,” to start the installation process..

Upon completion of the procedure, the WhatsApp icon will appear on the phone with the BlackBerry.

It remains only to create an account in order to start communication with the help of vatsap:

Benefits and features of WhatsApp for BlackBerry

Users of the Canadian Blackberry smartphone are not limited in their ability to get the most out of the “green chat” along with the owners of popular iPhones or androids:

– all this is available on WhatsApp on your BB phone.

Our article has come to an end, to summarize:

How to use the new chatbot to check facts for coronavirus in WhatsApp
How to record and send a voice message in WhatsApp
Saving WhatsApp files to a memory card
What video format does Whatsapp support
Pavel Durov calls on users to massively remove WhatsApp
Add a comment
Нажмите, чтобы отменить ответ.
Categories
Related Posts
Whatsapp databases folder - what is it
How to install and download WhatsApp on iPad?
How to remove backup in Whatsapp
Saving WhatsApp files to a memory card
How to update WhatsApp on the phone
This website uses cookies to improve your experience. We'll assume you're ok with this, but you can opt-out if you wish. Cookie settingsACCEPT
Privacy & Cookies Policy